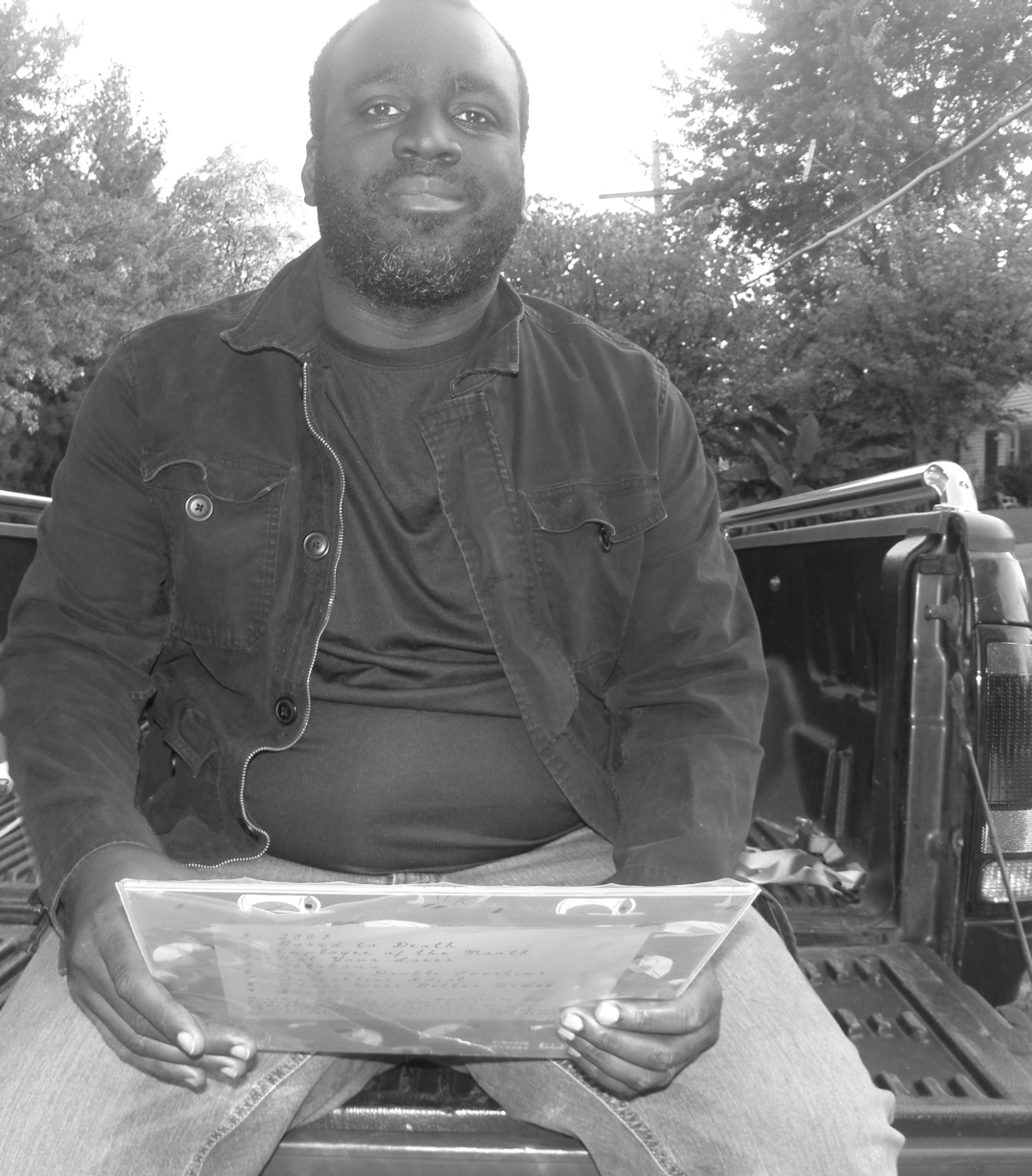 A Conversation with Tim Snow, Founder of Ninguid Records

Mustard had the pleasure of speaking with Ninguid Records founder, Tim Snow. Together we discussed the origins of Ninguid Records, the music scene in St. Louis, their thoughts on the current ska scene, and so much more!

1.Mustard is grateful to have Tim Snow from Ninguid Records join them. How are you today?

Mustard, I am doing great. Thank you for having me. It’s a dream to interview with my favorite condiment.

2. What label or artists inspired Ninguid Records? Have you always wanted to create a record label?

There are a lot of labels that inspired me, Off the top of my head Asian Man and Jump Start. When I first had the idea of starting a label 20 years ago, I reached out to both Mike Park and Jeremy Myers for advice and they were both kind enough to respond with what worked for them and what didn’t work.

Another influence would be Motown. One of the things that I thought Berry Gordy did best was promote all of his acts at once. The biggest supporter of any given release is the other bands on the label. I am happy that we have a community that sincerely helps build each other up and supports each other.

3. You’re tasked to write a mission statement about Ninguid Records. What would that statement say?

Our mission statement is that Ninguid Records exists to bring affordably priced, but quality records and merch to fans of Ska, Punk, and Comedy while still being responsible to our artists.

Right now, I am lucky that Ninguid Records isn’t my day job (yet), so I can price things lower than it if was my full-time job to support myself and family. It has made for some interesting situations. I remember when I launched the pre-sale for the Working Class Stiffs album, Rich Man’s Country, I received inquiries from some people who wanted to know if the label was legit since I priced the album so low.

4. What was the music scene in St. Louis like at the time of the formation of Ninguid Records? Which artists did you have your eyes set on?

Well, I launched the label in October 2020 (but I had been working on the label for about a year before that), so the scene was not exactly at a standstill, but it was tough because there weren’t a lot of shows.  It probably wasn’t the smartest idea to launch a business that is somewhat dependent on live shows when there are virtually no live shows. The other side to that though is it helped me a lot because there was something new in the music scene in Saint Louis.

I had my eyes on a few artists, but most of them didn’t respond when I asked if they were interested in putting out music on vinyl. Which I get I guess; I am sure people are always “Hey I am going to start a label and put out your stuff.” Then it never happens, and it could make one jaded. I eventually had the idea to put out Orangetree’s Jump Up albums, Fixing Stupid and Orangetree. The timing (fall 2019) was perfect because, around this same time, Joe Baker was kicking around the idea of getting Orangetree back together.

Joe and I worked together to time the announcement of the return of Orangetree along with the announcement of the Fixing stupid 12″…Then Covid-19 happened and that pushed our plans back a while.  The interesting thing is once I was able to announce the album release, suddenly the label had legs and it wasn’t as difficult signing bands, it went from me asking bands if they had any interest in working with me, to bands actively seeking me out to see if I had any interest in releasing their music, almost overnight.

5. Could you share with us what it is like running a label? Are there a lot of spreadsheets?

You know for me there are a lot of spreadsheets, but for me, I have been a long-time supporter of the six sigma process and I have brought some of those principles to running the label. I also handle Orangetree’s merch at shows and online and being a black belt has helped a lot.

Running a label is wonderful and stressful at the same time. I track every package that goes out the door and I watch it so much, that I generally know that there is a problem before our buyers do, sometimes even before USPS even knows. I once shipped 14 packages in a day and they all disappeared for 3 weeks before they turned up in Memphis randomly. Those 3 weeks were very stressful for me.

The other side of that is, I get to listen to a lot of music, sometimes before the public.  I get to talk to a lot of people and make new friends, like you Mustard. Running a label is amazing, I get to help bands get their music out to other people, I will never forget the look on Ted from Orangetree’s face when he held the Fixing Stupid 12″ for the same time, it was the same look that he had when he held my daughter for the first time when she was a newborn.

Yes, there are rough days when a band decides that don’t want to work with you (or vice versa) but then there are the days when you get an order from outside of North America and you are shocked and thankful for the support.

6. Ninguid Records specializes in Vinyl records. What was your first vinyl record? What sets vinyl apart from something like a CD or a digital file?

My first album was the “Sesame Street 10th anniversary” album, let me assure you that you can’t appreciate the full grouchiness of Oscar until you hear it on vinyl. I think my parents bought it for me when I was 5. The first record that I bought myself was “Dare to be Stupid” by Weird Al.

For me, when you play vinyl you are more engaged than a digital file or even playing a cd, you are physically dropping the stylus, holding the album jacket, and flipping the album over.   There are also fewer copies of vinyl (with the notable exception of Adele’s last album) so you are almost in this quirky club, right? If you are a discography completist, then there is a sense of accomplishment when you finally get all of your favorite band’s records collected after years of searching, again it all goes back to engagement.

7. Mustard had the pleasure of interviewing one of your roster members, Orangetree. Could you share how this relationship began?

Ted, the drummer of Orangetree has been one of my best friends for decades, in the late 90s he and I were playing music together. Just having fun. One day he pulls me aside and he goes “Do you know the guys in Orangetree?” I told him that I met Joe (who at the time was the lead singer of Orangetree) at a show and we talked for like an hour and I thought he was a good guy. Ted lets me know that he works with Jordan, the guitar player of Orangetree and that they needed a new drummer and ask him to audition, which he did and got the job.

Flash forward a few months and Jason joins the band, there is a show and everyone is about to leave and Jason is basically like “We can’t leave the merch unattended, Tim can you watch the table?” So I did and the same thing kept happening at shows to the point that I just would show up after doors opened and just walk behind the merch booth, that led to me just becoming their official merch guy and going on tour with them.

Over 20 years that friendship has just grown, now we are our current ages and our families are friends and I honestly can’t imagine my life without those guys.

8. Another member on your roster is Candylion. When did you sign them to Ninguid Records? How would you describe their sound? Can a human purchase a candylion?

Candylion was the second band that I signed, so that would have been shortly after I announced the Fixing Stupid 12″ I met Brandon the singer/guitarist for Candylion during the last few years of Orangetree when he and his friends were in a ska-punk band called Disputed.  Everyone took them under their wing in STL so almost every big ska-punk band had a show with them.  Eventually, over the years Brandon and I became friends and he was starting to send me demos.

One day he sends me a completed Candylion album and he says “I think I am going to throw this up on Bandcamp” and I just said “No way, this album is amazing. It sounds like a mix between The Stereo, The impossible, Weezer, and Green Day I want to put this out.” So we got Jamie Woolford from the Stereo to mix the album and he turned what was a really good album, into this amazing album. Sonically probably the best album on the label to date.

As for buying a candylion, I think it may be easier to buy a real lion.  Granted Halloween is right around the corner, so I am sure some specialty candy shop is selling candylions.  Just go to your closest candy store, tell them that you want the Ninguid Candylion Special and they should give you 10% off your next order.

9.  What are your thoughts on the current ska scene?

That current ska scene is probably my favorite ska scene in my lifetime. The fans are so amazing and supportive. I watch them interact with Orangetree and they are so thankful that Orangetree is playing, a lot of them weren’t born or were like 5 when Orangetree broke up, so they have no frame of reference of Orangetree, but they have been so supportive.

Then you have the bands, the bands are so amazing. Joe from Orangetree and I talk every couple of weeks about how we want to do a show with Catbite, if you heard Orangetree last week on the On The Upbeat podcast, he talked about how bummed he was that Orangetree isn’t playing the Catbite show in Saint Louis that is coming up.

Also, a lot of my favorite bands are getting back together like Against All Authority. They are so good and I am glad that they are back together. Honestly, this is the best time to be a ska fan in the last 20 years.

10. What is on the horizon for Ninguid Records?

Here’s what I can say on the record, 2023 will be the biggest year for Ninguid Records.  I think the album a lot of people are excited about is the Secret Cajun Band’s Big House coming out on Vinyl. It’s very hard to find copies of the cd and there aren’t a lot of streaming options for it. We are finally going to release the Self-Titled Orangetree album along with a new Orangetree album. Candylion is currently demoing songs for a new album. We will be releasing a 7″ from a certain blue-eyed soul, power-pop, 2-tone influenced band. I also have one temperamental artist, named Tim Snow who has been putting off his solo debut album for years, he says 2023 is finally the year, so we shall see.

11. Where can readers listen to artists from your label?

Secret Cajun Band – They are working on it, they are waiting for the next batch of AOL 100 free hours CDs to come in the mail