Going Through Hate mail with Pacing

Mustard had the pleasure of speaking with Pacing. Together we discussed their website, memes, their influences, their album “hatemail”, and so much more!

1. Mustard is grateful to have Pacing join them at Music Shelf. How are you?

So pleased to be here in this wonderful corner of the internet!!

2. As a condiment who only has been using the internet for two years they really love the design of your website. Could you share more about your website? Did you design it? Are there any Easter eggs within it?

Thank you!! I designed it and built it and I’m pretty proud of my thriftiness. It’s a single-page React app deployed to github pages, so the only cost is $7 / year for the domain.

No Easter eggs other than that my code is hot garbage and it’s amazing that it runs. Great idea though, updates to come!!!

3. Could you describe your relationship with music?

Oof, big question. Well my ears are on my head and they hear things and tell my brain about them and sometimes those things make me feel feelings.

In the past few years I’ve been spending more time actively listening to and studying music, so the way I hear songs has changed, for better or worse. Sometimes I hear something and it doesn’t really make me feel anything but my brain thinks “damn, the kick drum sample is mixed well.” So that’s weird.

I also recently joined a choir, and I’m trying to learn to read music. I don’t know how that has changed my relationship with music, I just wanted to brag about it.

4. You’ve been tasked to compile the best memes on the world wide web. What memes do you choose? What is your criteria? How do you use memes to further elevate your music?

What a fun idea! It would be hard because memes are so subjective. I feel like the more niche the meme the funnier for me. I follow an architecture meme page and I don’t even know anything about architecture. It’s just amusing to know that people have these really specific problems and other people can relate to them.

I joke about it, but honestly the line between the memes and my “real art” is getting blurrier and blurrier. There is this subreddit called “r/foreverbox” where people basically make very serious, sad confessions in the form of hideous 2001-word-art-meets-myspace-glitter-graphics memes. I find it really inspiring. It’s so much easier to be sincere when you’re joking.

5. How have social media platforms such as TikTok changed the music industry? What advice would you give to an artist trying to navigate this ever changing landscape?

Mustard, these questions are hard!! Ugh, TikTok. TikTok is a powerful and dangerous thing. It seems to me like every other platform is trying to become TikTok (reels, shorts, pinterest “ideas”) and TikTok is trying to become YouTube (trying to tame the chaos a bit and make it so people can actually find specific things instead of falling down a flight of stairs every time they open it).

I don’t feel like I’m qualified to give advice because I haven’t really figured out how to have a healthy relationship with social media. I think all you can really do is post things that you would honestly want to watch (not what you think people will want to watch) and do that consistently. Try not to compare yourself to other people, and don’t worry about trends or trying to go viral. All of this is easier said than done.

6. What is your creative process?

My ideal process would be that I have a flash of inspiration and I write the whole thing in one sitting, and then record it that same day, and perfectly capture the feelings of the song while I am still feeling them, and it doesn’t need any editing, and barely needs mixing because I managed to record the parts really well and the arrangement is well balanced. That usually does not happen.

I’m actually pretty inconsistent. I often write a song on guitar, but sometimes I just sing a thing with no instruments, or write words on a page throughout the day without a melody. Sometimes I make a demo with guitar or piano, and other times I build out a track starting with drums and write the song at the same time as producing it.

I feel like I am always racing against myself to finish before I lose the original feeling of the thing.

Many things! Stuff people say, memes, stuff I see while going for a walk, advertisements, other songs. I think musical theater, midwest emo, and folk music influence my writing a lot. For production and mixing my influences are more conscious because I am listening to music and actively thinking of how to steal sounds. Fortunately I’m not very good at that.

8. In 2020 you debuted “I’m Getting Kicked Out of the World” which highlighted your style of storytelling. What was the inspiration behind this song? Can a human appeal being kicked out of the world?

I’m so glad you asked!!! My friend Hali bought this painting from Pyramid Studios, this super rad art and music program in my hometown that serves adults with intellectual and developmental disabilities. A man named Rick painted it.

One day I was looking at it on my wall thinking “that’s fucking metal” and wrote the song. To me it’s about feeling left out. So maybe the closest thing to an “appeal” is finding other people who feel the same way you do.

I don’t know what the painting is about for Rick, but my buddy played the song for him and he liked it. 🙂 I really owe him a writing credit, the song would be nothing without him.

9. The internet lies. What is the most outrageous lie you have been told by the internet?

No idea! I’m probably still running around believing it.

10. Mustard loves the concept of your album “hatemail.” Could you elaborate more on the process of putting this email together? Have you personally received hate-mail?

Thank you! Yeah so I don’t know why my default songwriting voice is so mean. I think a lot of people default to writing heartbreak songs. My default is mockery, often directed at myself. Back to that whole sincerity through glitter thing. My idea for this album was songs from the mean voices in your head. Stuff you would never say to another human because it sounds ridiculous when you say it out loud.

I have never received hatemail unless you count this album! Someone did comment “kys” on one of my videos the other day though, which felt like some sort of internet milestone. I’m not saying I encourage this behavior, but I almost prefer a strong negative reaction over just boring people to death.

I’m working on an album!

Here is a thing:

Real poetry is always about plants and birds and trees

And the animals and milk and honey breathing in the pink

But real life is behind a screen

12. A human gets invited to see you perform. What kind of show can they expect?

It would probably suck! I’m not very good at playing an instrument, which I get around using the magic of computers. But lately I have been practicing playing my songs on acoustic guitar and it actually is really fun. I would love to play shows one day. I love going to shows and talking to people and I love attention. I will keep practicing.

Here are the links to my album

Lately I have been having fun making some special less-polished stuff for YouTube. I just finished a cover of Political Science by Randy Newman and I asked People of the Internet to send me the “most American photo on their phone.” So there should be a cool video of those up soon. I also made a collage with them. Look, there is Mustard in the sunrise!!! 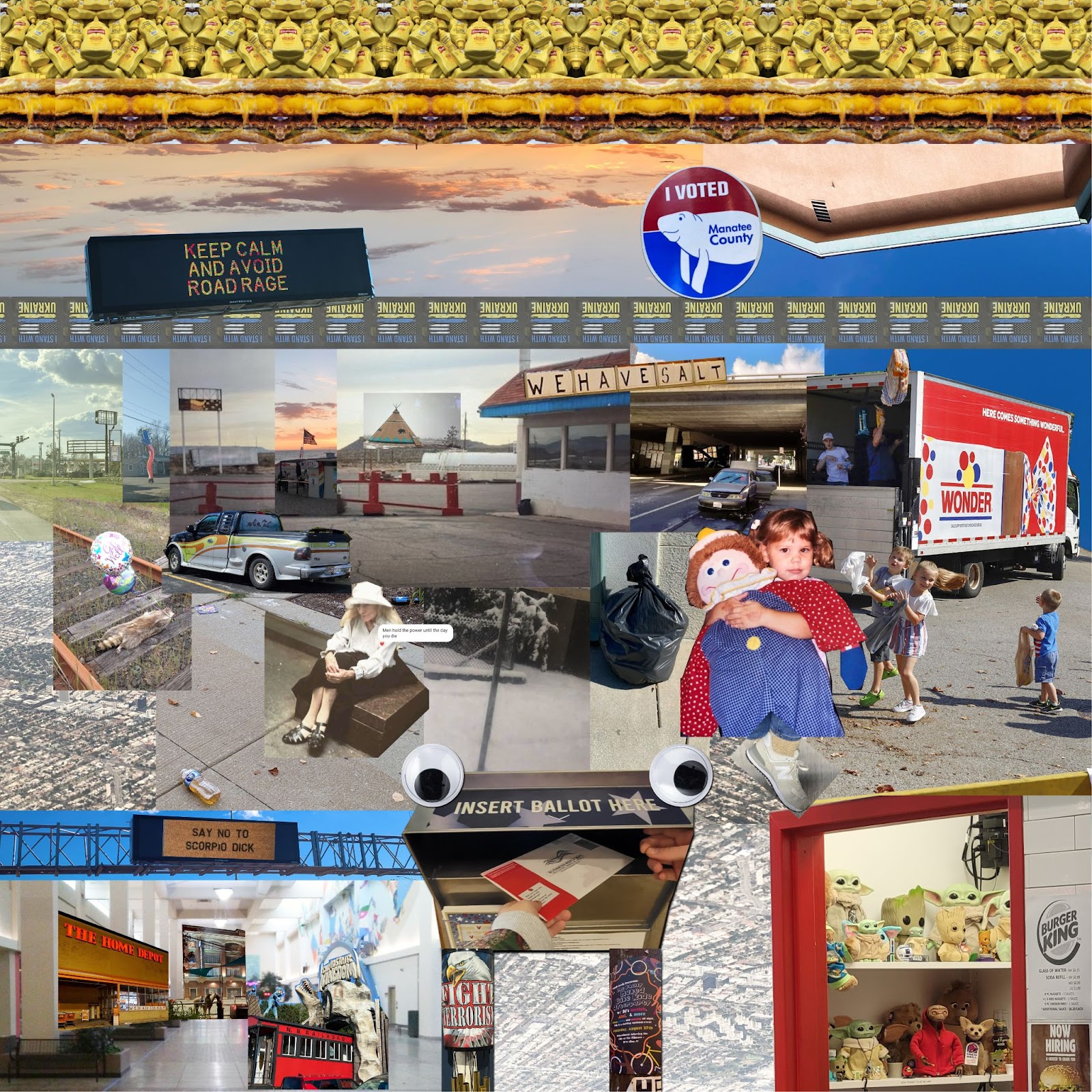