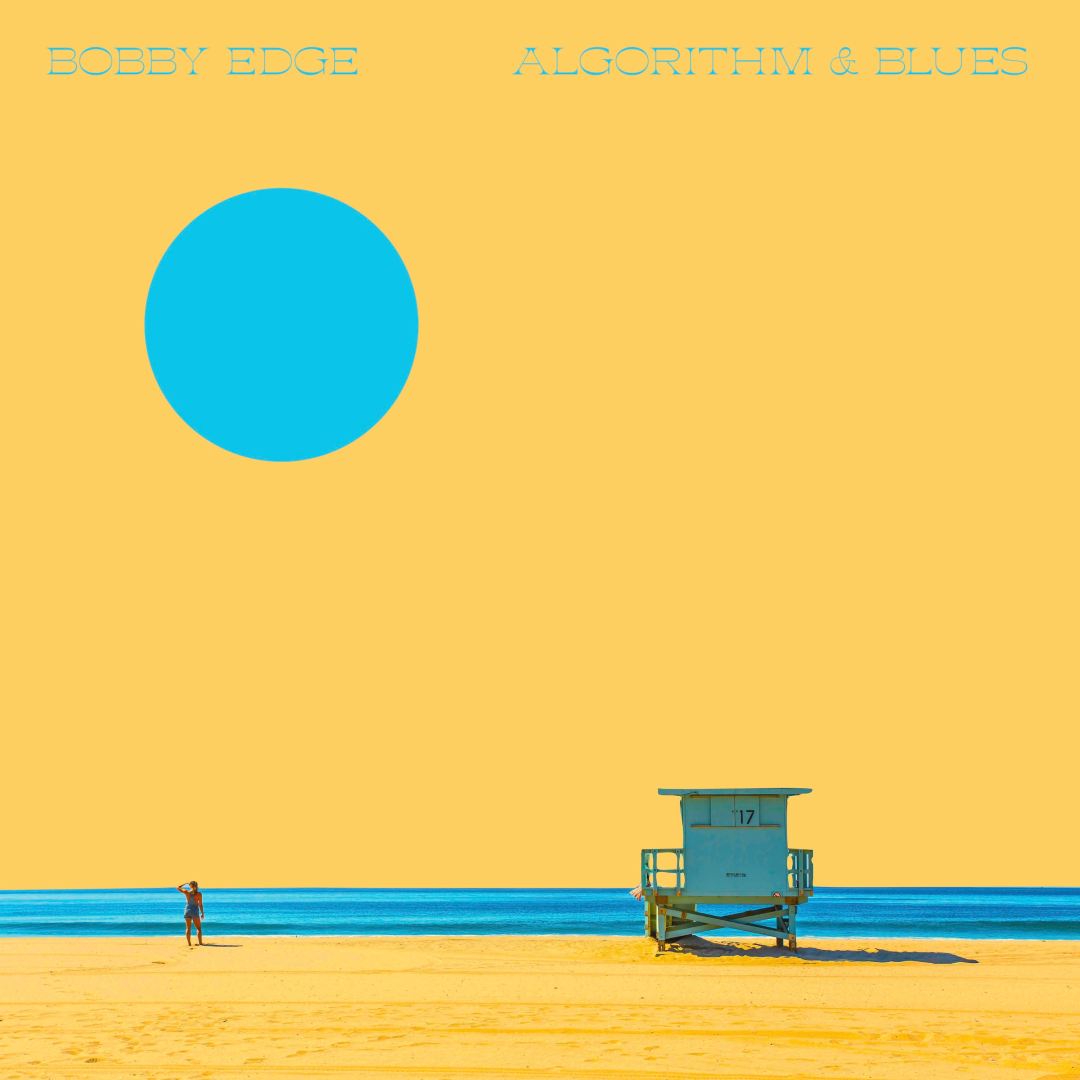 After spending years in other successful projects, and touring internationally, Bobby Edge decided to step out on his own and do an entirely DIY project without the pressures of record labels or anyone else. This is a project born entirely of love, and you can hear it in the music. The album title being Algorithm and Blues may lead you to expect an R&B album,and technically, you may be right, but this is not the rhythm and blues you were expecting.

The album starts off with an a capella intro, just 30 seconds of harmonized notes to set a tone and vibe for the album. It feels reminiscent of 1950s surf rock. Even before the first real song the tone is set and we can begin our journey appropriately. The rhythm and blues on this album is closer to your grandma’s rhythm and blues, the stuff that predated and ran alongside early rock and roll.

The cover art for the album is a bicolor image of a man on a beach with a lifeguard shack. The sand is yellow and the ocean is blue, but the sky is the same yellow as the sane and the sun is blue. As first it feels a little natural before realizing that something has been flipped on its head, and that is exactly where the second track takes us. Momento Maury is a play on the Latin phrase memento mori- meaning “remember you (we/ everything) must die”. The song has the sound and feel of an early 50’s rock and roll song, and even the music video for this song features the band in suits on a stage like the Ed Sullivan or the Lawrence Welk show. However, 1950s rock and roll tended to feature love songs and songs about trying to get the boy or girl of your dreams. This is where the imagery starts to give away the conceit. Like the sun being blue in a sky of yellow, or the music video where the band is dysfunctional and ends up fighting and abandoning the stage to an oblivious singer, the theme of love is abandoned and we are reminded that all things must die.

The next track is Endless Suffer, an obvious homage to a darker version of Endless Summer. This track, again, starts off with this 1950’s era rock and roll with beautiful harmonies throughout. If someone told me these were Beach Boys songs, I would not be surprised at all, but halfway through the song takes another major turn towards a pop punk/ emo sound. Suddenly this had the feel of inviting peak Blink 182 to help write the song, but it works incredibly well. The pace is faster, the harmonies are still there, but the drums, the pacing, and the melody have shifted.

The last track on the first half of the album is a cover of Fats Domino’s 1955 chart topping rhythm n blues hit “Ain’t That A Shame”. This is the first of two cover songs on the album, as Edge later brings us The Ronnettes “Why Won’t They Let Us Fall In Love”. Both covers are beautifully performed, produced, and mastered. “Ain’t That a Shame” is beautiful with perfect guitar, drums and harmoies, and the Ronette’s track has catchy doowop harmonies that make you sing along. They’re everything you would want with modern studio recordings of an early rock n roll songs that still stays true to the originals. After the first cover is a musical interlude, titled “Die Hard, Live Soft”, and like the intro to the album, it is set to prepare us for the second half of the album.

The second half of the album begins with “Calamity of Now” more of a pop punk song that somehow doesn’t feel out of place as the protagonist seeks help trying to figure out where their life went wrong to the constant beat of drums and punk guitar pulling the song forward. Somehow, in the final minute of the song, Bobby Edge seamlessly brings in Doo Wop backing vocals into a punk track. The song is clearly the same song, but the speedy drum rhythm has shifted, the lead vocals shift, and the steady doo wop doo wop of the backing vocals bring the song to a close fully blending the sounds of  indie pop punk with 1950s rhythm and blues, rock, and doo wop.

While “The Evil That Men Do” is a good standalone track, it doesn’t feel like it adds anything special to the album. It continues to blend modern music with the 50s and 60s rock and R&B sounds, along with the more common themes of modern lyrics, it doesn’t necessarily stick out for anything impressive. It’s a good song, but if the album was one track shorter, this track wouldn’t be missed. However, the next song is Civil Wart, another clever play on words and another unexpected genre fusion. The song breaks immediately into a hard-core song with aggressive vocals, the most aggressive guitar and drums on the album and the narrator shout-sings about needing to get their head straight, and trying not to suffocate before a chorus comes in seamlessly and naturally over the shoowop shoo-wop, shoowop shoo-wop of the backing vocals. The blending of the genres works brilliantly here.

The final song on the album is “Small Frog”, about the protagonist being a small from in a large pond. Even lyrically this has all the feel of a song from the 50s. This feels like the end of a love letter to a lost era of music. The song and album closes with the blend of the sound of frogs at a pond, you can close your eyes and see it at sunset. At the end of the day, the end of the album, and the end of the love letter to an era that is long gone, but clearly not forgotten, and Bobby Edge is ready to bring it to your ears and to your heart.

The album is available January 19.